Tweet
All donations go toward sustaining the Thrive movement, including coordinating solutions strategies, critical mass actions, maintaining the website and customer interface, and translating the movie into more languages. We rely on donations and the sale of DVDs to keep the Thrive movement going.
Want to donate by check?
What do donations fund?
Donations are not tax-deductible.
By Sheldon M. Sperber, MD

Which came first, the chicken or the egg?

In the beginning was the null point, the moment of nothingness, the empty void. The only thing left to happen after the null point was a big bang. On our side of the null point a big bang looks like the big bang. Then something went out in all directions and all at once from the big bang. The nature of that something has been vigorously debated by scientists. I say that consciousness alone went out in all directions. Without consciousness there are no protons, electrons, neutrons or atoms; there’s no God particle. If there is no consciousness there is no entity to search for and recognize these structures as existing.

The structure in our lives that contains a null point and is both expanding and contracting is a torus. I say that consciousness, the shape of our beingness, of our awareness of being present in and to life itself is a torus. As an example, the magnetic field of the earth exhibits the shape of a torus. Doughnuts are said to be toric shaped, but for me there’s too much center to a doughnut to describe accurately the shape of our consciousness. I want to stress that the center of the torus that is consciousness, the path through which whatever left from the null and void point must return to the null and void point is a teeny tiny phenomenon in time and space within consciousness. 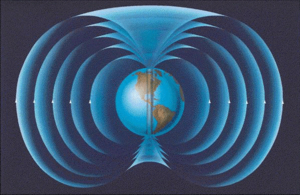 The null point is the moment consciousness sleeps. Consciousness lets go of all creativity and responsibility and rests. It seemingly goes away. And then it does what it must do for that is its nature, its essence. It moves, it stirs, it awakens, it creates and it does so full throttle in every direction and all at once. Whatever it creates is a new beginning, a new big bang.

What if that null point just beyond the event horizon—the event horizon being the last moment of time that can be seen, recognized and recorded—is the eternal life promised to us? That the miracle of life is that there is always consciousness. It never began, it will never end. It is its own miracle. We, as separate moments of consciousness, are particles in the present torus wave configuration of consciousness. We are consciousness’s very nature: to watch itself go by. We witness the bloom, the outgoing rush of its particles from its central null point, we perceive a sense of newness and growth and unlimited potential; we are the flight of a particle through the torus wave of consciousness. And then we experience the return home to the null point, be it a mellow journey or a seeming struggle. Perhaps instead of relating to the approach to the black hole as everything’s being forcefully dragged into it against its will to survive intact, we might see the approach as a welcomed letting go of all that encumbers us; as a moment of total, safe, perfect, restful sleep.

As a child I wanted to find, come upon, the end of the universe. I know that I’m weird but I thought about how is it possible that I might head out in any direction from where I stood and go straight forever and ever and never come to an end of whatever it was that I was moving through. How could space go on forever and ever with absolutely no end. I struggled to know what might be on the other side of an end to my universe. Could there be another side after the end? What might be on the other side of the end of our universe? Wouldn’t another side to my universe simply be more universe?

As a particle in a torus wave of consciousness one always has the sense that one is going forward, ahead, wherever one as a particle might be in the structure of the torus wave. This phenomenon may explain why a particle, a scientist, looking out in all directions to see if his or her universe is expanding or contracting will see both. The energy of a torus is at all times both leaving and returning to its central most null point. The magnetic lines of the earth are both emanating from the center core of our earth and at the same time are returning to it.

The Maggid of Mezritch, Dov Ber of Mezeritch, a Hassidic rabbi born at the beginning of the 18th century taught that as anything and everything changes from being A to being B there is always a point when it no longer has any characteristics of A, of being A and does not yet have any characteristics of B, of being B. That, he instructed, is the point where and when everything returns to the fullness, the full potential of God, to rest peacefully and safely. We all know that change is the one constant of the dynamic life that we experience. Therefore, all things of which we are aware, all energy and all matter of which we have consciousness about, pass through that God moment; all that is know returns to its source of creation. I believe that the Maggid—Yiddish for preacher and more literally sayer—was speaking spiritually centuries ago to the present day scientific notion of the null point of black holes.

I’m not sure how it works and I’m not making any guarantees, but like the early notion of computers that garbage in will result in garbage out, I believe that the more pure, the more light with which consciousness arrives to its null point, the better is the next big bang creation. Admittedly I have trouble with the words more pure and with more light as I’m not sure what they or I mean exactly. I only know that each one of us, each seemingly separate conscious particle, must determine that quality for oneself. When we live well, when we live less selfishly, when we live with the awareness and act with that awareness that another person’s, another particle’s quality of life matters equally to us, we do not leave a better legacy to our children; we leave a better legacy to ourselves.

Many years ago my Kabbalah teacher asked me what I understood by the statement in the Torah that “Man is evil from his youth.” (Genesis 8:21) Most scholars, most people take it to mean that human beings are evil from the time that they are young and remain so throughout their lives until they die. That explanation of its meaning is not how I hear it. I believe that when we as individuals do evil, do hurtful, harmful, self-centered actions, we do so because our consciousness is young in need of further development and refinement. We are being told that our collective and individual consciousness still has need to grow as it moves towards being more magnificent and all inclusive of its own unlimitedness. I believe that with each successive return to our source and subsequent big bang we have the potential to improve the quality of consciousness’s creation however the new manifestation may express. As a good Jewish boy taught, there is but one life. And, I say that, that one life is a torus wave of consciousness.

Dr. Sperber is a graduate of Tufts University School of Medicine in Boston, Massachusetts. He is a retired psychiatrist living in Oakland, California. Please address any interested correspondence to: smsperber@yahoo.com