DANGER: Our Air, Water, and Soil are Terribly Polluted 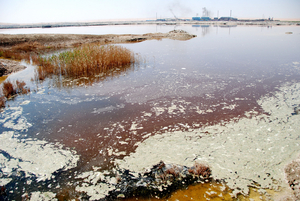 Do you believe individuals and organizations who destroy the health of others and of eco-systems should be stopped and forced to provide restitution?

We all play a part in polluting, but some more than others. Corporate pollution is out of control, and often goes unprosecuted, even when it’s dangerous to our health and the environment.

Some examples of corporate pollution with disastrous effects include:

Every year corporations also release hundreds of millions of pounds of toxic pollutants into the air. The University of Massachusetts has put together an index, called “The Toxic 100”, ranking the worst corporate air polluters. Among the worst are Bayer Group, Exxon Mobil, Ford Motor Company, Conoco Phillips, Dow Chemical, and BP.

The biggest source of air pollution in the U.S. comes from fossil-fuel electric power plants.[4] 77% of the largest 1000 fossil fuel-fired power plants are not subject to pollution controls under the Clean Air Act’s New Source Review requirements, which regulates the emissions of new power plants and prevents old ones from increasing emissions.[5]

Part of the problem with all this pollution is that we’re externalizing costs, meaning that the costs of goods and services fail to reflect their overall impact. This allows the worst corporate polluters to make a profit even though they’re destroying the planet. To learn more about this check out Annie Leonard’s video, The Story of Stuff:

Organizations and individuals can and should be held accountable for their pollution, especially if it’s harming others.  This can be taken care of within the legal system, which we discuss more in the Environment Solutions article and the Liberty Section.

There are alternatives to this failing model – check them out below.

OPPORTUNITY: We Can Eliminate Waste and Create Sustainable Systems

We are already on our way to creating more sustainable systems – more and more people are recycling and innovative manufacturing processes are emerging that drastically reduce waste.

In 2007, Americans kept 85 million tons of trash out of landfills and incinerators by recycling their waste.  Although recycling is an important short-term step, it is not the ultimate solution. Recycled products break down over time (something referred to as “down-cycling”) which eventually makes the products and materials useless. This is a good first step, but we can do even better.

Find out how community organizers in India transformed their neighborhoods and created a “zero-waste” state. (click here)

Cradle-to-cradle is an answer to linear, dead-end production and consumption. Coined by architect William McDonough, it is the idea that we can create closed-loop manufacturing cycles, where businesses reclaim and reuse their products over and over again. For example, Interface, Inc., one of the world’s largest carpet manufacturer’s, not only makes high-quality, long-lasting carpets with sustainable materials, but actually reclaims, reprocesses, and reuses all of the carpets they install. It has transformed the industry from being notoriously wasteful to more self-sufficient.  There is now a cradle-to-cradle certification program to encourage more conscious consumer and business decisions.

[1] Nearby Saginaw Bay was found to have the highest amount of dioxin levels ever found in the U.S. at 1.6 million parts per trillion.  When an EPA regional administrator, Mary Gade, tried to go after Dow Chemical she was forced out of office.

[5] New Source Review provides loopholes whereby old power plants can get away with higher emissions. The legislation is so loosely defined that old power plants are getting away with modifications to their plants that increase emissions. The specific problem with New Source Review is that it permits "routine scheduled maintenance" in older plants so long as the maintenance does not result in a "significant increase" of emissions, yet it does not define "significant" so big plants with heavy-duty legal counsel end up skirting the intent of the law. See: