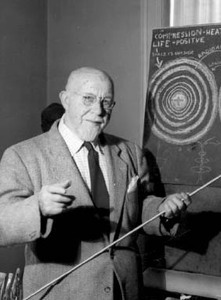 “The fundamental principle of the Universe is rhythmic balanced interchange.”

Walter Russell (1871-1963) was the sculptor and painter for the White House as well as a national figure skating champion. He had a 39-day naturally altered-state experience of ecstatic knowing that revealed to him how energy moves in the universe. He spent the rest of his life trying to educate scientists about these principles and time is proving him correct. He seemed to have seen in his inner vision the importance of both the torus and the vector equilibrium.  He put his knowledge of the octave nature of matter to the test by predicting the existence of two chemical elements that were later verified just as he had proposed.  Then, with Westinghouse labs, he designed and created a device (the “Transmutor”) capable of accomplishing aspects of the alchemist’s dream, the changing of one element into another.