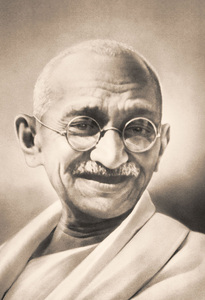 “When people make up their minds they want to be free, nothing can stop them.”

Mahatma Gandhi (1869-1948) was a pioneer of non-violent civil disobedience and leader of the Indian Independence Movement.  He protested the British occupation by boycotting with others on a massive scale and refusing to cooperate, always non-violently. One of his most renowned and effective protests was against the British imposed salt tax – Gandhi led a 240 mile march in 1930 to the sea coast where he and others could produce salt on their own without paying taxes.  It drew worldwide attention and caused millions more to join the movement for independence in India.  Gandhi’s teaching of non-violent protest, called Satyagraha, loosely translated as “truth-force”, has inspired people to fight injustice all over the world with peaceful ”non-cooperation.”