The year before I was born, in 1951, a man named Solomon Asch did a social experiment at Swarthmore College to study the effect of group pressure on personal perception. The experiment was designed to reveal the degree to which someone will deny their own reality, even when there is evidence to support it, in order to share the dominant reality of a group. 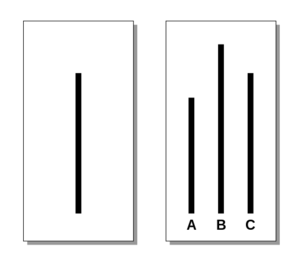 In the experiment, a host asks some random student if they are willing to participate in a study. Once agreed, the host brings the unsuspecting student into a room where there are eight or more other individuals who appear to be fellow participants in the experiment. They sit down in front of a screen where there is one line on the left and three lines on the other side to the right. Of those three lines, there is one that is always exactly the same as the one on the left.

The eight or more other people all lined up in front of the screen are not in the same role as the student — they are in on what is happening. So with the unsuspecting student always answering last, the host asks each person to identify which line on the right is the match for the line on the left. Sometimes the participants say the correct line, but sometimes they unanimously identify an incorrect answer; they agree among themselves on which wrong line to choose.

Overall, seventy-five percent of the innocent participants gave at least one incorrect answer — and in those cases their incorrect answer always matched what the groups said. Hence the reality of social pressure to conform was demonstrated.

But here is what is really important to me about this: Only five percent of participants were always swayed by the crowd. Twenty-five percent of the sample consistently defied majority opinion, with the rest conforming only on some of the trials.

It seems to me that we are each now living as that unsuspecting student was in that experiment, surrounded by media, education, and social pressure to conform to a false reality that replaces information with propaganda, meaning with distraction, and truth with lies. And like that student, we are made to believe we are alone when what we acknowledge is not what the mainstream is telling us. But in fact it took manipulation to make him feel like no one saw what he saw. And the same is true for any of us currently questioning the dominant paradigm. There are hundreds of millions of us all over the world.

So when we speak up and question out loud what we are being told, we validate each others’ questions and insights. We expose the social experiment that is happening at our expense.

I recently was introduced to Richard Grove, a forensic historian who, with his wife Lisa Arbercheski, has made a series of videos that connect the dots on everything from education to 9/11. Richard was working in the World Trade Center at the time of the 2001 debacle. He was stuck in a traffic jam that morning, which is why he is alive today to help us understand what happened. His personal story of awakening is deeply touching and relatable, and the chronicle of events that his inquiry produced is as valuable as any we have ever found.

We won’t get from where we are to a free world in eight second sound bites. We give thanks to Richard and Lisa, and to our bold, inquiring network of people who know it takes time and courage to unlearn the deception, claim the truth, open our hearts and obsolete the old paradigm so that we can truly have a world that works for everyone.

Check out this introduction to Richard’s work:

If you like what you see, please support Richard and Lisa to share the facts and embolden their research that so deeply benefits us all.