“Looking back on almost half a century of research, including thousands of books, films, interviews with experts from diverse fields, if I were to pick one common denominator to all the facets of my quest, it would be the TORUS, the fundamental energy pattern that invites our alignment at every level of our existence for us to survive and thrive.”

The torus, or primary pattern, is an energy dynamic that looks like a doughnut – it’s a continuous surface with a hole in it. The energy flows in through one end, circulates around the center and exits out the other side.

You can see it everywhere – in atoms, cells, seeds, flowers, trees, animals, humans, hurricanes, planets, suns, galaxies and even the cosmos as a whole.

Scientist and philosopher, Arthur Young, explained that a torus is the only energy pattern or dynamic that can sustain itself and is made out of the same substance as its surroundings – like a tornado, a smoke ring in the air, or a whirlpool in water. 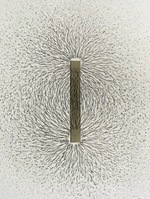 The torus also applies at the human level. Each person not only is a torus – our bodies are a continuous surface (skin) with a hole through the middle (intestinal tract) – but we are each surrounded by our own toroidal electro-magnetic field.

Each individual’s torus is distinct, but at the same time open and connected to every other in a continuous sea of infinite energy.

It is the same energy field you can feel with a magnet. It is usually invisible, but by scattering iron filings loosely around a magnet you can actually see the toroidal shape of energy.

Most torus dynamics actually contain two toruses – called “tori” – like the male and female aspects of the whole – one spiraling one direction toward the north pole and its opposite spinning toward the South pole. This is also referred to as the “Coriolis” effect.  Examples are the weather on the earth and the plasma flow of the sun.