This is a special blog to inform the Thrive network of an extraordinary event that happened recently, and which we have been authorized to make public. It takes a lot to shock me at this point, but this did it!

Recently we posted a blog on Crop Circles that included an extraordinary account of a crop design that was predicted and then witnessed in its creation, by a Dutch man named Robbert van den Broeke.

On July 13, just a few days ago, scientist and researcher Nancy Talbott sent me an email thanking us for our coverage of their recent occurrences and she let me know that she was notifying me and several others, by dated notes, that Robbert had predicted a coming series of connected patterns that would make an “equal triangle.” He had never done this for a series of designs before.

Here is the relevant text from the email Nancy sent me alerting me to what was supposedly coming.

Hi, Foster,
…
Last night Robbert told me something I think I should tell you. He normally has not done this, but he said he “saw” it so clearly he was certain it will happen. This week (he thinks) 3 new crop formations will appear in his general area—all on the same night (remember that Holland is as far north as the UK, so the amount of darkness in the summer is about the same—5 hrs). Two of these will be in “grain” (wheat) and one in “maize” (corn). Further, when their locations are plotted on a google map they will be found to form a “perfect” (I think he meant equilateral) triangle. In all the years I’ve known him he’s never made a prediction like this, but he sounded so certain I thought I’d tell you just for the hell of it…and see what happens.
…
Nancy

I wrote back to her the same day:

Duly noted. I will keep this email to confirm prediction should the patterns materialize…

I was stunned when Ms. Talbott wrote again a few days later, recounting that the incident had in fact happened, just as predicted.

Last night all 3 appeared, just after midnight….3 different villages, one in maize (corn), one in barley and one in wheat (as R predicted)…AND they form a triangle as he also predicted. Will send report as soon as ready…in the meantime, here’s the google map showing the triangle (an isosceles): 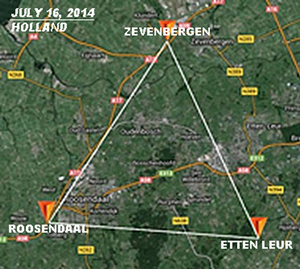 Nancy Talbott also wrote to me on July 18:

It happens that one of the other people I told R’s prediction was the guy who posts these reports on his website. He printed my email to him with the prediction, as well as the full reports:

Here is the other recipient’s write-up of what occurred. Follow this link to see the whole story.

I always approach this sort of story with a strong skepticism, but the level of detail, witness reports and accuracy of prediction here warrants our consideration.

I am not sure of any particular implications to the geometry involved in this incident — either of the individual patterns or of the first-of-its-kind “pattern of patterns.” One thing I sense is that we are being exposed to the next level of credibility and to confronting the telepathic connection exemplified between Robbert and whatever entities have the capability to do this.

Don’t take my word for it. I wasn’t there and didn’t personally have the experience. But after listening to the evidence, putting it in context of the reportedly extra-terrestrial or at least, other dimensional contact Van den Broeke has been having his whole life, I am excited and intrigued. Check it all out and tell me what YOU think!