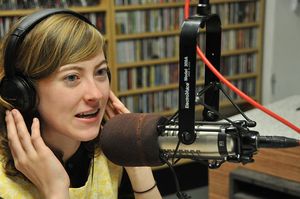 As owners of the public airwaves, American citizens have the opportunity to make the media accurately reflect their needs. THRIVE has a 3-staged approach that incorporates a whole-system strategy to solutions. Applied to the media sector, Stage 1 involves reforming existing media systems to be honest, diverse, transparent, empowering and informative. Stage 2 involves limiting government control and regulation of the media, making it accessible to as many people as possible. Stage 3 relies on complete voluntary cooperation with no government intervention, and more local participation and management of media.

Empower Communities to Build and Access Diverse Media Sources
Large Internet Service Providers are legally protected in at least 14 states making it very difficult or nearly impossible for municipalities to build their own broadband networks and compete with the monopolies.[1]  A couple of ways this may be dealt with is by repealing laws that protect Big Media and expanding community based FM radio.

Repeal Laws Giving ISP Monopolies an Unfair Advantage in the Market
A number of cities have been successful at stopping media giants from getting more legal protection in their communities.[2] Along with stopping more laws like this from being passed, we want to repeal already existing laws that unfairly protect Big Media. Check out the list of laws that existed in multiple states as of 2004 so you can join others to take action.

Expand Low Power FM (LPFM) Community Radio
LPFM stations are community-based stations with a signal range of 2-4 miles. They empower community members to easily broadcast within their neighborhood, bringing more diversity, perspectives, and local coverage to the media. In 2000, the FCC made licenses available for these stations, however, it has been limited to rural areas due to intense lobbying efforts by the National Association of Broadcasters who argued that LPFM signals interfere with their commercial signals in high-density urban spaces where audiences are the largest. Making more licenses available to all communities – and banning large broadcasters from snatching them up – would be a quick way to expand the scope of media. To learn more about this and take action, check out the Prometheus Radio Project.

Reform the FCC
Currently there are five presidentially appointed FCC commissioners who serve five-year terms.  As the owners of the airwaves, however, it makes sense for the American public to elect FCC leadership rather than have them appointed by the President. Debates and elections would need to be publicly funded in order to keep private interests out of the FCC and properly educate constituents about the issues before voting.

Increase Transparency of Media Funding
Imagine if the media – broadcasters, newspapers, magazines, websites, etc. – had to reveal how they were funded and who owned them at all times. This sort of transparency would help people make informed decisions about the media they rely on by constantly revealing the economic incentives that influence coverage of issues. To discuss how to achieve this, check out the related Big Qs and add your comments.

Expand Internet Services
40% of U.S. homes are not connected to the Internet or have slow dial-up connections – most of which are poor, rural, and minority populations. This is important because your ability to access the Internet and have a fast connection are directly related to your ability to participate in society, get a job, and share and receive critical information.  As we move through Stage 1 of the THRIVE solution process, it will be very beneficial to keep these disenfranchised people in mind and redirect government funding from war and interest on Federal Reserve debt to expand services to benefit as many people as possible.  Residents of Lafayette, Louisiana were able to get the fastest Internet connection to their town after big Internet Service Providers refused. Check out the Success Story to see what they did - and what others can do - to succeed.

Decrease News Censorship
News is censored all the time: political, legal, and economic pressure can influence what gets reported; and certain stories are misrepresented or simply ignored. For example, in 1991 the George H.W. Bush administration banned media from covering soldiers coming home in caskets after being killed in the Persian Gulf War. Newspapers could not even publish photos, making it difficult to reflect the real, everyday losses of war. The ban lasted 18 years, until April of 2009.  With this type of censorship, the media loses its ability to report accurate, honest information and the public is inadequately informed.

This stage involves limiting the government’s role in media, while still protecting the commons. This means pulling back government regulations, downsizing media agencies such as the FCC, and allowing a truly free market to emerge.

This is uncharted territory and there are many important questions, concerns, and ideas to address in this stage. For example, loosening FCC regulations has historically resulted in more media consolidation, but diversification and decentralization is critical. So how do we loosen government regulations without simply giving corporate media more control? You can discuss this critical question with others in the Big Qs section of the site. Another important question to address in Stage 2 is “how do we apportion available bandwidth to represent those who don’t own or can’t afford to invest in media companies?”

These are the types of issues that need to be debated and discussed publicly.  We could create a public interest TV station to cover the progress and open the conversation to everyone.  As owners of the airwaves, Americans can demand that a certain portion of broadcasting is devoted to the public interest.  The TV programs could cover progress in all sectors, debates from all points-of-view, strategies for moving forward, brainstorming sessions on Stage 3, and much more. If this interests you, join with others make it happen. You can even get credit from an accredited University to develop THRIVE-related solutions. Click here to learn more about it.

In Stage 3, the ultimate goal is a totally free market and complete transparency.   We wouldn’t make the transition to Stage 3 until people are sufficiently empowered in Stage 2 and have time to establish effective solutions.

As we get closer to Stage 3, we can explore alternatives to government control and empower communities to create honest, diverse, and transparent media.

[1]States with Pro-Monopoly Protectionism Laws.
[2]For example, in early 2009 two new bills titled “Level the Playing Field” –  Senate Bill 1004 and House Bill 1252 – were proposed to stop North Carolina cities from providing broadband. They were brought forth in large part due to success in Wilson, NC where a service called Greenlight provided community members with high-speed Internet after the cable companies refused. Significant citizen pressure stopped the bills from being passed and were sent to “study committees” for review in May of 2009.