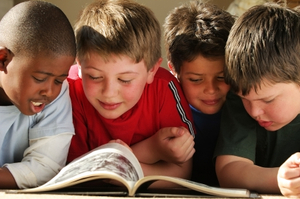 State schools are failing: inefficiencies are rampant, teachers are underpaid and lack  accountability, and students are not getting the quality education they deserve.  The more the state intervenes the worse it seems to get.

We’re promoting a radical shift in education. Ultimately we want to create a society where each individual is free to pursue the type of education that most appeals to his or her passion, need, and learning style to promote critical thinking and creative expression.  In order to achieve this we cannot resort to the usual state school solutions – throwing more money at a fundamentally flawed system will not help in the long run. Instead we want to develop strategies that break down the state monopoly on education and empower all people to choose where and how they want to be educated.

These education solutions have to take place alongside solutions in other sectors. They are all interconnected. For example, while there is still public education, we’ll need to decrease the military budget and get rid of interest on the Federal Reserve debt and redirect those funds to finance the transition away from state schooling. Education taxes would also decrease and eventually be eliminated, which would free up funds for families to pay for their own schooling.

The basic strategy we’ve come up for the education sector involves:

Stage 1: Reform Existing Systems – Transition out of the state-school model and encourage alternative schools to emerge by loosening government regulations and allowing people to attend the schools they choose.

Stage 3: Set up Systems for Voluntary Cooperation – Keep the government out of education and allow people to choose the education they desire.

Redirect a Portion of the Military Budget into Education

A small portion of the military budget could be redirected into education. A recent poll showed that American taxpayers want more money to go toward education and less toward the military. These funds could go to (1) help state schools get the resources they need to make it through this transition period, (2) a new government scholarship program to finance education of the poor, and (3) develop new models of education and funding solutions for non compulsory education.

Set Up A Scholarship Fund For Those Who Need It

There will be fewer and fewer people who need assistance as taxes are lowered, but there will inevitably be some people in need of financial support as the state school system is overhauled. A state scholarship program could provide temporary relief in this first stage until the private sector is able to take on the responsibility. Funding could come from redirected military funds and elimination of interest on the Federal Reserve debt.

Setting up this state scholarship fund will not be easy. We can learn from existing, though imperfect, assistance programs such as school voucher systems to learn how government funds are set-up, how people receive the funding, and how to determine who qualifies.

Some existing programs to learn from include:

Milwaukee Parental Choice Program – This is the nation’s oldest voucher program for low-income families. Parents receive up to $6,500 to enroll their children in private school. The program has grown significantly from 337 students attending seven schools in 1990 to 18,550 students attending 122 schools in 2008. Studies show that these students have a higher graduation rate than those in public schools and that parents are satisfied with the program.

School Choice Info – There are a variety of school choice programs in Cleveland, Colorado, Florida, Maine, Milwaukee, Vermont, and Washington D.C. that are described on this site. It gives information on legislative history, fiscal impact, research, enrollment, demographics, and more.

Because our goal is to move away from state schooling, the taxes that currently go toward funding schools would no longer be necessary as more private schools emerge and the scholarship program grows. 90% of K-12 education funding comes from state and local sources, [1] so eliminating these taxes would require a variety of strategies.

At this stage, the market would be open for alternative schools and programs to emerge and expand. Families who are unsatisfied with state schools could have their children receive any type of education they desire and stop paying taxes toward the current state schooling system.  Those who are unable to afford private schools could receive funding through a scholarship program.

Here are a few successful models that new schools could potentially learn from.

Sudbury Valley School – An independent school ranging from pre-school to high school based out of Framingham, MA, that allows students to choose what they want to do every day. It is based on the belief that everyone has a natural curiosity to learn and that student’s will get the most out of their education by initiating their own activities and getting the support they need to do it.  They have a compelling structure in which each student and teacher has one vote to make decisions about rules, staff, facilities, etc.

Charter schools are publicly funded schools that are privately run.  They are exempt from state rules and regulations, but must meet “accountability standards” that typically require the school to show increased student performance (usually based on state tests). While charter schools have received a good amount of criticism, they do provide some valuable insight. Part of their success is due to the fact that they are run like a business, not a government institution. This transfers to policies and systems that demand accountability. There often are more efficient use of resources, higher teacher salaries, higher teacher performance standards, and a benchmark system to evaluate the school’s overall performance. Some of these systems may help inform private schools as they begin to form.

Another approach to education is to ditch the idea of schooling altogether and to support each child’s natural interest to learn. “Unschooling” is a growing subset of the homeschooling movement that is not based on any particular curriculum and does not follow any set structure. The underlying belief is that children are naturally curious and that they will learn as long as they are supported in pursuing their passions. It has been catching on in recent years, with some estimating that the unschooling population is growing by 10-15% every year.[2]

We are living in momentous, challenging, and exciting times, yet very few classes focus on the current state of affairs. Students would benefit and become more engaged if their education reflected real world situations rather than abstract ideas and notions. You can get college credits through Gaia University and Wisdom University to study various subjects on the Thrive website and propose solutions to many of the problems we currently face.

With billions of dollars of taxpayer money returned to the people in Stage 2, more and more funds would be available for charitable contributions.  Caring for others would no longer be handled (inadequately) by the state, but the responsibility of citizens. Given the current state of the world, it’s clear that the state, while officially responsible, actually fails in its role.

State schools would no longer exist and people would be free to pursue the type of education they desire. The state scholarship program would be phased out and privately run scholarship programs would kick in.  For a breakdown of the numbers and how this could work, see Chris Cardiff’s  article, What About the Poor?.

Get and Keep Government Out of the Educational Process

The key in this stage is to keep government out of schools. There are already 8 million children in the U.S. who learn free of state control, so educational independence has already begun. In this stage, the possibilities are endless….Have fun! Learn and teach what you want! There could be schools focused on solving global crises, sustainability programs, teaching co-ops, internship programs, whole-systems curriculum, crafts, trades, arts, sciences, technology, homeschooling, “unschooling”, etc.

The early colonies actually serve as a model for a functioning education system that honors individual choice. Women, immigrants, African Americans and Native Americans were not honored within this system, but applied today, we could create equal rights for everyone.

Not withstanding the genocide upon which the colonies were established, former Director of Education Policy for the Mackinac Center for Public Policy, Matthew J. Brouillette, says “Early America was arguably the freest civil society that has ever existed. This freedom extended to education, which meant that parents were responsible for, and had complete control of, their children's schooling. There were no accrediting agencies, no regulatory boards, and no teacher certification requirements. Parents could choose whatever kind of school or education they wanted for their children, and no one was forced to pay for education they did not use or approve of.”

We can learn from this model. To read more about it, check out Brouillette’s article here.