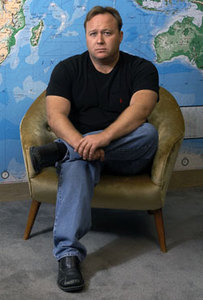 "Liberal, democrat, conservative, republican. It's all there to control you! Two sides of the same coin. Two management teams bidding for control, the CEO job of Slavery, Incorporated! ... Resistance is not futile, we're going to win this thing, humankind is too good. We're not a bunch of under-achievers! We're going to stand up, and we're going to be human beings. We're going to get fired up about the real things, the things that matter - creativity, and the dynamic human spirit that refuses to submit."

Alex Jones is an investigative journalist, documentary filmmaker, host of the nationally syndicated Alex Jones radio show, and a critical analyst of the global domination agenda.  He has repeatedly revealed corruption at all levels of government across the political spectrum and is committed to defending liberty and standing up for individual rights.  Jones has produced 13 documentary films, including TerrorStorm: A History of Government Sponsored Terrorism, Endgame: Blueprint for Global Enslavement and The Fall of the Republic. You can learn more about his work and analysis on his website, Infowars.