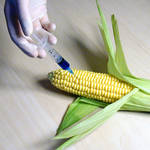 In Europe, which has mostly banned GMOs, the tide turned when people actually took to the fields to destroy the crops that were destroying their farms and their lives. We need to ask ourselves where self-defense starts when toxins are being snuck and forced into our bodies through the food, water, air and “laws.”

Learn more about GMOs, and what you can do to stop them.

Follow the money behind GMOs, the Rockefeller’s, and government ties with Monsanto.