Media as a Tool for Empowerment - Barbara Marx Hubbard

Why not have a transparent way to see who is funding the news we get and a way to assess what conflicts of interest they might have?

We rely on the media to be informed about what’s going on in the world. It shapes our thoughts, values and beliefs about society. With consolidated corporate control of the media, we don’t get the whole picture. Without accurate, honest, transparent and diverse information we can’t make informed decisions about our lives. 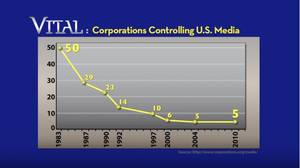 Today there are only 5 who dominate the industry: Time Warner, The Walt Disney Company, News Corporation, Viacom, and Bertelsmann.[1] GE follows as a close sixth. These conglomerates now own more than 80% of the U.S. media including TV and radio stations, movies, newspapers, magazines, books, and websites. They literally control what people read, watch, and hear.

The problem with media consolidation is that:

To see how we can change this dynamic, check out the opportunity below. 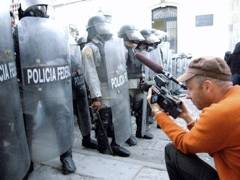 Independent media is a good alternative to corporate media.  It has investigative reporting rarely seen in mainstream news and its funding comes primarily from listeners, viewers, and foundations rather than advertisers. Although foundation contributions can be quite influential, and are often the tax-exempt arm of the large corporations, independent media does cover issues that are untouched by corporate media. Any news outlet is apt to have some sort of bias, because its decisions are ultimately made by individuals and each of us has our own opinions and agendas. Furthermore that bias will attract support from like-minded individuals. But if the sources of funding are transparent and not beholden to the selling of particular products, and we each take responsibility for accessing a variety of points of view, we stand a much better chance of getting accurate information and informing a process of truly critical thinking.  By supporting independent media we can begin to get the honest feedback we need in order to effectively transform the prevailing global dynamic of injustice, suffering and planetary degradation.

You can challenge media consolidation by getting your information from diverse sources and contributing to independent media.  What matters most is that you access a variety of sources so that you get a range of perspectives and that the sources are transparent about their funding. It can be surprisingly challenging to find out who funds the media, even for independent stations. You can put pressure on these stations and other news programs by contacting them at the emails listed below. Stations that are viewer-funded can provide the most diverse coverage because they don’t risk losing their advertisers. Some of our suggestions include:

Free Speech TV is a progressive, independent TV and multimedia network. It is 33% funded by viewers.[6] Foundation supporters include the Alphawood Foundation, Lannan Foundation, LEF Foundation, Otto Haas Charitable Trust, Park Foundation, and The Tides Foundation. You can contact them here.

Democracy Now! is a national, daily, independent news program hosted by journalists Amy Goodman and Juan Gonzalez. They have a socialist slant, but do in-depth coverage of stories rarely seen in mainstream media. It is 65% funded by viewers and does not publicly disclose information about large Foundation funders. You can contact Democracy Now! here.

These news sources span the spectrum and together provide a snapshot of what is being reported from various political perspectives.  They each provide valuable information, but often have their own biases, as noted below.

Common Dreams gives you daily news from a progressive perspective.

Huffington Post brings you daily breaking news on a range of topics.

Truthout works to “broaden and diversify the political discussion by introducing independent voices and focusing on under-covered issues and unconventional thinking.”

The Cato Institute is a public policy research organization — a think tank — dedicated to the principles of individual liberty, limited government, free markets and peace.

Info Wars is the publication site of activist and radio host, Alex Jones, who exposes critical information about the global domination agenda.

The Center for Public Integrity produces original investigative journalism about and is dedicated to making institutional power more transparent and accountable.

Project Censored examines media censorship and "tells the news that didn't make the news and why".

Free Press is the largest media reform organization in the U.S. with close to half a million activists and members. Their current campaigns are focused on internet neutrality and fighting media consolidation.

Donate to Stations that you Want to Support

Independent media is largely funded by listeners and viewers. Pledging your support has far-reaching value.

Why not have a transparent way to see who is funding the news we get and a way to assess what conflicts of interest they might have?
Read More
Internet Neutrality

How can we stop corporations from limiting our access to websites on the Internet?
Read More
Link Embed
Close

Media as a Tool for Empowerment - Barbara Marx Hubbard

Empowerment of All Parts - Amy Goodman