Magic Money: How “Pump and Dump” Picks Your Pocket 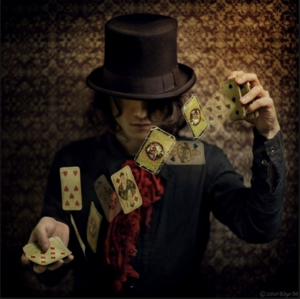 I used to live with a great magician. He did magic tricks for parties, and for impromptu gatherings we’d have around the house. When guests would clamor to learn how he tricked them so well, he always declined to answer, saying to do so would violate The Magician’s Oath. The Oath, which was introduced over 2,400 years ago by the Greek Father of modern magic, Charlatates, was an agreement among magicians not to divulge the secrets of their trade, a way to collectively protect their art and in many cases their livelihood.

Even though my friend never told me how he did his tricks, by virtue of proximity and repetition, I was able to figure out a few of the sleight of hand moves he made. I realized first and foremost that to unpack the trick, I had to stop looking at what he was showing me, and instead look for what he was doing while I was distracted by his show.

Thirty years later I’m reminded of these sleight of hand techniques as I sit in the airport terminal on my way home from visiting with my daughter, reading headlines that proclaim a strong economy, a stock market boom (prior to the recent Dow Jones drop), and the value of the dollar at an all time high.

The gentleman next to me, with whom I strike up a conversation, asks,

“How can there be a financial collapse when the economy is booming?” 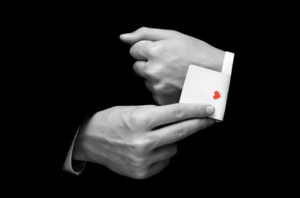 I start to wonder, if this man had been alive during the Depression of 1929, would he remember the “booming economy” that preceded that fall? Then again, he is old enough to remember the boom that preceded the tech bubble that burst in 2000, and the boom that preceded the housing collapse in 2008. Come to think of it, I can’t recall a single financial collapse that wasn’t preceded by an inflated bubble. So why is the pattern so elusive? My memory catapults back to my years with the magician, and how easy it was for me to be mesmerized by his skillful sleight of hand.

If it were just the entertainment of magic, I’d happily stay quiet and not bother with the awkward conversation likely to ensue if I venture to keep this conversation going. But I feel sad about how many people get screwed in these collapses, how the whole boom and bust cycle that we’re entrenched in seems to be a calculated “pump and dump” scheme of which this nice man and millions of others are going to bear the brunt.

So instead, I dive in:

“Do you know what a pump and dump scheme is?”

He suggests we look it up on our smart phones, to get a “real” definition.

“Pump and dump” is a form of fraud that involves artificially inflating the price of an owned stock through false and misleading positive statements, in order to sell the cheaply purchased stock at a higher price. Once the operators of the scheme “dump” sell their overvalued shares, the price falls and all but the initial investors lose their money.

In this scenario, you make money on the way up, and on the way down. The pumping up creates a bubble that bursts when the stocks are dumped onto the market.

* Margin means buying stocks using funds you borrow from your broker. When you buy a stock on margin, you are amplifying the effect of the investment, whether good or bad. When you own enough or bet on enough to influence the price, then it functions as a rigged way of “playing the odds.”

** Short selling is the sale of a security that is not owned by the seller, or that the seller has borrowed. Short selling is motivated by the belief that a security’s price will decline, enabling it to be bought back at a lower price to make a profit. Again it’s not just a belief if you can control it — it’s insider betting.

“Pump and dump” is making money on creating and bursting financial bubbles. According to my research, this practice is not only legal, it’s rampant. And this manipulation is not just happening with stocks, it’s going on in all kinds of markets, including with currencies themselves. Meanwhile, the economic sleight of hand reels in vast numbers of believers, risking their retirement funds, their homes, and their lives.

What’s the evidence that we’re in the midst of a pump and dump cycle?

Here’s what occurs to me as we sit talking, waiting for our plane:

Despite all the “Quantitative Easing” (printing money, the pump part of currency pump and dump) and low interest rates, there is no substantive indicator that the dollar has any value other than what the Federal Reserve simply says it has. A strong economy? The actual purchasing power of the U.S. dollar has declined by 98% in the 102 years since the Federal Reserve was established.

So what are substantive indicators we can look at to determine what kind of shape the economy really is in? How about jobs? Unemployment as it’s currently reported is completely skewed. What now qualifies as unemployment has been redefined so that official statistics exclude people not actively on record for seeking jobs in the past four weeks (termed “marginally attached” to the labor force). Official statistics also exclude those “employed part time for economic reasons” which means those who need to work full time to make it but who are unable to find full time employment. When these functionally un-and-under employed people are counted, the unemployment rate is closer to 10.3%, more than double the 5.1% the U.S. Bureau of Labor Statistics would have us believe. 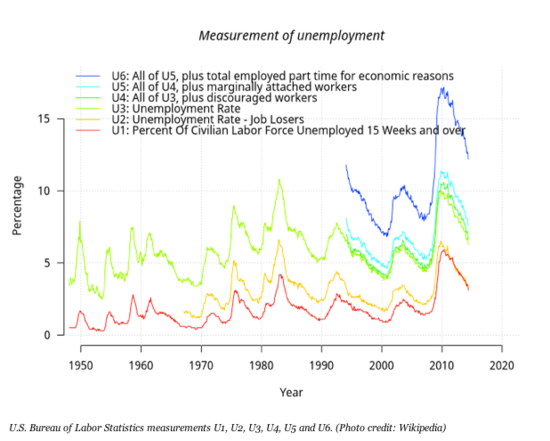 Manufacturing is also down. The ratio of wholesale inventories to sales in the United States just hit the highest level since the last recession. What that means is that there is a lot of manufactured stuff sitting in warehouses that can’t be sold because people are buying less.

As a CNN article explained, approximately one-third of all U.S. households are living “hand-to-mouth”. So jobs, manufacturing, and spending are all down.

Even subprime lending is making a comeback. That’s the practice of making loans to people who are high risk — and not as likely to be able to pay them back. The New York Times’ Deal Book estimated that 27 percent of the auto loans issued in 2013 were subprime. And it’s also making its way back into the mortgage business. Wells Fargo is now once again making subprime home loans.

The bond market is also telling. Bonds that are not generating revenue worthy of high investment have traded at all time highs, indicating that their value is being externally “pumped” up. This indicator is determined by what’s called the cyclically adjusted price-to-earnings ratio, or CAPE ratio. Right now the CAPE ratio is the third highest that it has been since 1890. The only times it has been higher than this were in 1929 (!!) and just before the dot-com bubble burst…

Major global trade is bypassing the U.S. dollar for the first time since the dollar was established as the global reserve currency after the Bretton Woods agreement in 1944.

Russia and China now do their deals—including oil trades—without the dollar, and it is the same with South Korea and Japan. The UK joined the Asian Infrastructure Investment Bank (AIIB) despite the U.S. “telling” them not to, as did 57 other countries. These moves both strengthen China’s global power and communicate a widespread lack of confidence in the dollar and U.S. primacy.

Rigging everything from gold and silver markets to currencies is no longer the domain of conspiracy theories; it’s been documented and reported by many sources, although usually described as the result of isolated incidents.

Even George Soros predicts an economic crash, if tracking his investments shows any indication of his confidence. According to SEC filings, he has lowered his investments in all stocks by billions and bolstered his holdings of gold.

Speaking of gold, how are other countries relating to it? 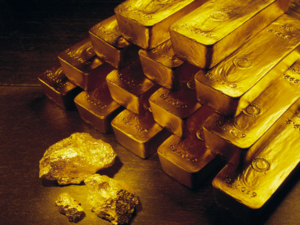 China, Brazil, Russia, India, and South Africa are all basing their economies on gold. The U.S. is not, and has failed to demonstrate that it even has much physical gold left. When Germany’s central bank tried to repatriate their 300 tons of gold from where it was supposedly stored in Manhattan, they came away with 5 tons and no visible proof that the rest was anywhere to be found. Needless to say, this prompted renewed questions on whether Germany's gold still exists in those Manhattan vaults or if it has been melted down, leased, or even sold.

After more than an hour of friendly conversation, my temporary travel buddy said, “It sounds like we’re paying off credit card debt with a credit card. Like a reckoning just waiting to happen.”

Does all this prove that we are headed for a collapse?

No, all this doesn’t prove we are headed for a collapse. But it is a sure indication to me that there is some pumping up going on — of our bonds, our currency, our self-proclaimed international primacy, and our national self-image. And historically speaking, when there’s a pump, there’s a dump.

I’m certainly not alone in my concern. Nearly every financial forecaster who saw the 2008 collapse coming is predicting one now. Some of their links are attached below.

What’s the best thing to do in the face of such instability?

To the best of your ability and circumstance, I’d say:

What are forecasters saying?

Where is Germany’s gold?