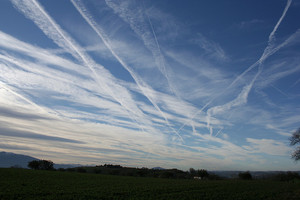 Photo by Andrea Ursini Casalena.
Watson, Claire
Governments and corporations are deliberately manipulating and altering Earth’s climate, endangering the lives of people all over the world. Two of the most extreme cases of geo-engineering are chemtrails – the release of toxic chemicals into the air that are poisoning people and the planet – and HAARP – an electromagnetic antenna array based in Alaska that can send radio-frequency radiation over large geographical areas and manipulate weather patterns causing earthquakes, tsunamis, and more.  These projects represent some of the worst crimes in history, yet most people are unaware of them.

Over a hundred patents [1] have been granted to major corporations, including Monsanto, for aerial spraying of materials that can penetrate your lungs and blood, cause disease, disrupt your mental capacity, cause you to be sterile and even cause premature death. These materials are being sprayed all over our planet – and on you – right now, without your knowledge or consent.

For over ten years, observers have been noticing white aerosol trails being dispersed in the skies that don’t behave like usual condensing jet exhaust. When seeking explanation, investigators are told by the government that these are just the normal “contrails” that we see coming from commercial jets and that they are perfectly safe. However, they don’t dissipate the way regular condensation trails do. They linger for hours, spreading across the sky, and are often laid out in cross hatch patterns. The government has refused to test samples collected underneath the trails. Now a TV news report from Germany has confirmed that their military is in fact doing aerial spraying of chemtrails.[2]

An article from the NIH, the National Institutes of Health, confirms that not only are chemtrails real, but they are suspected to be responsible for a variety of neurotoxic conditions including MS.[3]

In 2001, Congressman Dennis Kucinich of Ohio introduced “The Space Preservation Act”, HR 2977.  As former head of the House Armed Services Committee overseeing U.S. military projects, Kucinich’s bill called for the peaceful use of space and a ban on “exotic weapons”, including chemtrails. 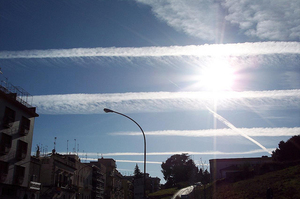 Intense spraying of dangerous chemicals from planes has been reported in, at least, the US, Canada, Germany, England, Australia, Mexico, South Africa, Bahamas, Puerto Rico and Croatia. A nasty mixture of parasites, pathogens, toxic heavy metals and nano-engineered particles have been found falling to earth from the trails of certain planes. Aluminum, barium, bacillus spores, radioactive thorium, cadmium, chromium, nickel, desiccated blood, mold spores, yellow mycototoxins, ethylene dibromide and synthetic nano-fibers are among the ingredients found in collected samples.[4] As these fill the atmosphere and lodge in our lungs and blood streams through the air we breathe and the food we eat, it represents the most unavoidable toxic pollution in history.

In some areas under the spray, aluminum levels in the soil are so elevated certain trees and crops are struggling to survive. Interestingly, the USDA, which receives royalties on GMO crops, was recently granted a patent for seeds that can grow in soil with high aluminum content.[5]

There are hundreds of photos of Chemtrails, ground based videos, and even a video shot from above a plane while it was turning on and off its sprayers.

The Council on Foreign Relations ran an article in its Foreign Affairs journal promoting the use of dumping heavy metals in the atmosphere to combat global warming.  They also held workshops on the subject titled: “Unilateral Planetary Scale Geo-engineering and the Challenge of Global Governance.”  Recently their conference in Monterey, California, called “Strategic Aerosol Geo-engineering” announced a ban on reporting such activities.[6]

For an authoritative look into over a decade of research into chemtrails and a comprehensive timeline/history of chemtrail activity, check out Clifford Carnicom’s website. To view extensively researched documentary films on chemtrails see, What in the World Are They Spraying: The Chemtrail/Geo-Engineering Cover-up and Why in the World are They Spraying?.  Even the History Channel has begun reporting on chemtrails, HAARP and their possible connection.

Theories as to what chemtrails are intended for range from enhancement of radar, to weather control, aerial mass inoculations, mind control, and sickening/weakening/culling the population.[7]

We Can Expose Chemtrails and Restore Clean Breathing Air. Most people are unaware of chemtrails. If we spread the word and expose these covert programs, we can then prosecute corporate, government, and military offenders and restore purity to our atmosphere. 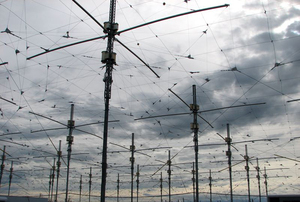 Given the choice, do you want to let the government manipulate the weather, create earthquakes and potentially control your mind?

HAARP, an electromagnetic antenna array project in Alaska, has been a joint effort of The US Navy, the Air Force, the ARCO oil company, Raytheon and the University of Alaska, Fairbanks.  It’s the world’s largest antenna array, but it is not a listener, it’s a sender. It’s an “ionospheric heater” that can focus 3.6 billion watts of radio-frequency energy into a single area of the atmosphere.

The military and the patent documents say HAARP could:

The defensive and exploratory capabilities of HAARP are what are being acknowledged publicly. Researcher Nick Begich has uncovered far more sinister probabilities and reported them in his book with Jeane Manning, Angels Don’t Play This HAARP and the video by the same name.

The “Earth-penetrating tomography” capability of the HAARP array can create a high-pressure bubble in the upper atmosphere. This bulges up the top of the Ionosphere, which then snaps back down sending an electromagnetic pulse into the Earth to detect oil or gas reserves. This same technique, however, with the levels of power generated by HAARP could theoretically cause earthquakes and potentially associated tsunamis.  The Chinese government accused the US of intentionally initiating the quake of 2008, citing the use of HAARP.

Here are some chilling facts to consider:

1) A large HAARP energy concentration tends to create a characteristic rainbow light pattern in the sky as the energy builds.

2) This pattern was seen and filmed over the Sichuan province in China in 2008. The video above shows the rainbow lights before the earthquake in China.

3) A half hour later, this exact area was hit with the disastrous Sichuan earthquake.

4) For three days leading up to the devastating earthquake in Haiti on January 12, 2010, a Japanese atmospheric monitoring group tracked the turning on and amplifying of HAARP, and saw it turned off right after the quake.

Why would HAARP be used to cause an earthquake in Haiti?  It could be because of the recent discovery that Haiti is rich in resources. Shortly before Haitian President Jean-Bertrand Aristede was removed by a CIA-backed military coup in the early nineties, he produced research and a book detailing for the first time the location of vast Haitian resources, including oil (potentially more than Venezuela) as well as gold, uranium, zyconium and iridium, and how they would benefit the general population.

5) As the Haiti earthquake occurred the US military had 20,00 troops stationed in Miami, Florida at the tip of Florida for an exercise aimed at ‘rescuing Haiti from a hurricane.”  There were similar exercises conducted at the same time as the 9/11 attacks in New York and the 7/7 train bombings in London. The troops were immediately deployed to commandeer the airport at Port-au-Prince. Former presidents George Bush Sr. and Bill Clinton were immediately put in charge of the “relief effort,” which has been a miserable failure, while the takeover of Haiti’s sovereignty by the US military and by a consortium of foreign banks has been successful. This could be a classic example of the “Problem, Reaction, Solution” tactic for taking over resources, rights and control while trying to avoid the backlash at home and insurgency abroad that accompanies straight out war. For more on this see the Global Domination Agenda topic.

6) Venezuelan President Hugo Chavez has accused the US of intentionally causing the earthquake in Haiti.

[5] Patent #7582809 was granted Sept. 1, 2009.  It was assigned to the US Department of Agriculture and the Brazilian Enterprise for Agricultural Research. According to Cornell University Chronicle Online, the research project was supported in part by the McKnight Foundation Collaborative Crop Research Program, the Generation Challenge Program, the National Science Foundation and the USDA. It was developed at the Robert W. Holley Center for Agricultural Health at Cornell University in Ithaca, NY. Leon Kochian and Jurandir Vieira de Magallhaes are the primary inventors/ researchers.