What are humans doing that would be causing a vast percentage of bees to die off, and how can we save them? 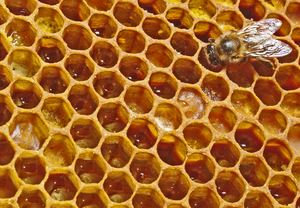 Photo by Max xx.
Watson, Claire
Honeybees are responsible for one out of every three bites of food you take.  In the U.S., they pollinate an estimated $15 billion in U.S. crops each year.[1]  They are the unpaid workers that prepare food for the dinner table.  But in recent years, honeybees have been vanishing.  In the winter of 2006, beekeepers in the U.S. lost a third of their 2.4 million colonies.[2] The following year, 35% more vanished.  The causes are still not fully understood.

This problem is known as Colony Collapse Disorder (CCD) and there are a number of theories as to what’s causing it. Rowan Jacobsen, author of Fruitless Fall, sheds light on the fact that honeybees are likely dying from a combination of factors and that most of them stem from the way we farm.   Some of the causes include: pesticides; insecticides, such as the commonly used imidacloprid; viruses, including varroa mites; poor nutrition, from high-fructose corn syrup that is fed to the bees and monoculture crops; antibiotics that are pumped into unhealthy hives; and constant travel from farm to farm with no down-time that seasons naturally provide.

The whole system of industrial agriculture, and the demand that it creates for more and more honeybees, is one of the problems.  In 2010 it was revealed that the EPA was well-aware that the pesticide Clothianidin (marketed as “Poncho” by Bayer) posed serious risks to honeybees, yet it didn’t do anything to stop it.[3]  If we want to save the honeybees, it seems we’ll not only have to change the way we take care of honeybee hives, but also the way we grow food.  Check out some of the opportunities below.

Opportunity: We Can Save Honeybees While Solving Other Problems 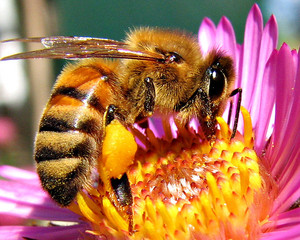 If Colony Collapse Disorder is indeed caused from multiple stress factors, then the following actions can improve honeybee health, while also helping the environment and ourselves:

Organic farming – Bees pick up pesticides easily – a study in 2008 identified 46 different pesticides in 108 pollen and wax samples.[4] One sample had 17 different pesticides alone – the average was five.  Constant exposure to these toxins cannot be good for honeybees and pesticides certainly aren’t good for us or the environment – we need to cut down on pesticide use.

Diverse, native plantings – Honeybees have poor nutrition partly because monoculture farming (the planting of a single crop) cuts down on the diversity of their diet. Native flowers attract four times as many pollinators as non-native ones. By planting more diverse crops and native plants, we can improve the diet of honeybees. You can find out more about native plants in your region by contacting your local Native Plant Society. 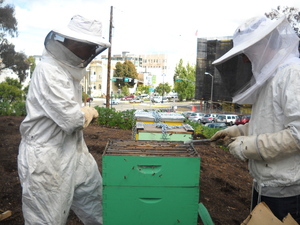 You can help the honeybee population grow by keeping your own. It takes work, but it’s rewarding.  Some resources to get started include:

You can create a pollinator-friendly habitat in your own backyard. Check out the planting guides on the Pollinator Partnership website to get started.

[4] What Have Pesticides Got to Do with It? by Maryann Frazier, Chris Mullin, Jim Frazier, and Sara Ashcraft. June, 2008.