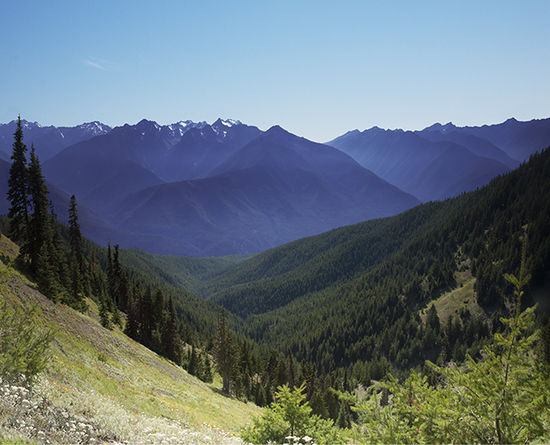 Please submit your comments/questions before Nov 28th at the following website:

Citizens have only recently learned of the Navy’s plans to turn large areas of the Olympic Peninsula into an “Electronic Warfare Training Range”. The Navy plans to train pilots in Electromagnetic Warfare tactics using our National Forests for their land-based emitters, which will be used in conjunction with squadrons of supersonic Growler jets. The pilots will be practicing advanced Electronic Warfare tactics in the airspace over Olympic National Park.

The project poses serious threats to public health and to wildlife. More than three million visitors come to Olympic National Park every year, and thousands of families make their homes in this area.

The Navy has skirted doing a comprehensive Environmental Impact Statement (EIS) for this “project” by claiming there will be “NO SIGNIFICANT IMPACT”.

The US Forest Service has accepted this claim and has decided to grant the Navy a long-term permit to use our National Forest roads for mobile “emitters”, which will be emitting powerful electromagnetic radiation.

Public pressure and outrage has extended the discussion to allow the testing until the end of November.

Now is a critical time to show your support for this issue.

The Forest Service is inviting pubic input on their decision to grant a permit to the Navy. We have a very short window of opportunity to voice our objections. The deadline for comments is Nov 28th.

Only “substantive objections” will have the power to influence the Forest Service’s decision. Before formulating your objections, please review the following:

Know that if you have already submitted objections, you can resubmit your previous comments in the form of questions, and add additional questions, as long as you do so before Nov 28th.

A suggestion: Formulate your objections/questions in a separate document. Be sure to save a copy of it. Once you’ve done that, copy and paste your comments into the comment box on the Forest Services website. (You can also attach it as a separate PDF file) Then submit a copy of your objections to your elected officials. This step is critical for making our voices count. (See links provided at the end of this post)

Please submit your comments/questions before Nov 28th at the following website:
https://cara.ecosystem-management.org/Public//CommentInput?Project=42759

Forest Service officials have stated that only “substantive” comments will have the power to reverse their decision.

This means that you might point out where the Navy may have violated Federal law, which, in this case, is NEPA.

NEPA refers to the National Environmental Policy Act of 1969. Through this Act, the federal government recognized “each generation’s responsibility to act as a trustee of the environment for future generations.” The Act mandates a coordination of all Federal plans, agencies, policies, actions, puts the protection of our environment as a Federal policy, to “assure for all Americans safe, healthful, productive and esthetically and culturally pleasing surroundings…without degradation, risk to health or safety, or other undesirable or unintended consequences” (42 U.S.Code 4331)

Substantive comments might point out how the Navy’s Environmental Assessment actually violates NEPA. Some ideas are outlined below. Add more if you can. Remember to pose your objection as a question such as “Why has the Forest Service not conducted their own independent research? Why are they choosing to accept the Navy’s very outdated ‘science’?”

It is not required to include all the legal details of the argument. Just point out that the Navy’s Environmental Assessment is in violation of NEPA, and ask the Forest Service why they are allowing these violations? Consider the following:

Please submit your comments/questions before Nov 28th at the following website:
https://cara.ecosystem-management.org/Public//CommentInput?Project=42759

Important: Please cc your federal and state representatives with your comment letters:

For local and Washington State:

Out of local area: refer to this page for your representatives’ contact information: http://www.wsha.org/0311.cfm

To read what others have said in comments: https://cara.ecosystem-management.org/Public//ReadingRoom?Project=42759

For more information on this subject please visit: http://www.takebackyourpower.net/news/2014/10/31/electronic-warfare-in-olympic-peninsula/