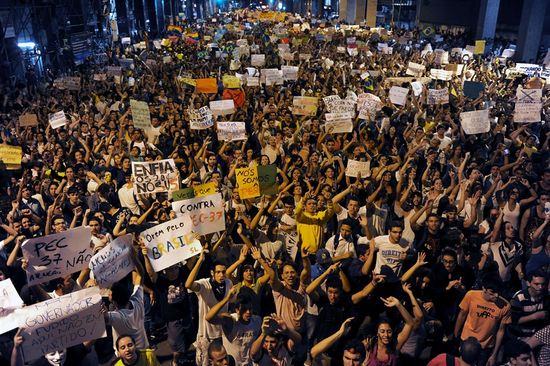 People all over the world are waking up, speaking up and linking up! In this audio recording from a call with THRIVE Movement staff members, filmmaker Foster Gamble highlights inspiring news stories of citizens uniting around the world, overcoming “Eminent Domain,” funding independent media, and refusing the EU in Iceland.

Foster:
OK, it’s Good News Tuesday again and I find it particularly appropriate because I’ve just recently learned that President Obama does his drone assassination list in the Oval Office every Tuesday. He renews his hit list and then someone takes that off and makes it happen. So, I think it’s particularly appropriate to counterbalance that with some good news that’s going on in the world.

I want to start this week with what’s going on in Brazil. As many people are seeing, in the mainstream news even, there are millions in the streets in Rio de Janeiro, São Paulo, and other cities. It first started in relation to things like public transportation fare hikes and park closings, but it rapidly seems to have tapped into the emotions of the people and expanded into expressing outrage about inflation, government corruption, banking scams, and lots of other issues. It really seems to be just tapping the discontent that is there.

And, of course, there are forces who will try to take advantage of this or who may have even been involved in provoking some of it intentionally for their own purposes, but there were some polls done in Brazil to find out who was showing up for these protests and here are some of the figures that really touched me: 84% backed no particular political party, 77% have higher education, 22% are students, 53% are under the age of 25, and 71% are first time protestors. I think that says a lot. They were asked why they were protesting and most said that they were protesting increased fares to begin with, but then 40% said they were protesting corruption, 31% against violent repression, and 24% against the politicians.

That’s powerful to see that going on in any country, obviously, but it’s also going on in Turkey, where a very touching thing happened where when the protestors were being scattered by the police, they made a chain, a human chain, of mothers who got together and actually got the police to back off by creating their protective chain. In Bulgaria, even the President praised the weeklong protest rallies against corruption, non-transparency, concentration of media ownership, and a whole bunch of other issues. Anti-austerity protests in Italy are going on and this is obviously reminiscent of the Arab Spring in Egypt, Tunisia, Libya, and other countries.

So, I think the key thing for me about all this is that worldwide we have the numbers. It’s kind of like Obama’s original election. There was a huge turnout for real hope, real change, for transparency, for non-surveillance, and things like that and even though he didn’t turn out to be what people were hoping for, that hope was real and it’s the same thing in all these other countries. It’s the desire. Even if people are being duped about what the solution is going to be, the desire is real and spreading. Now, we’ve been divided by race and religion and politics and class and gender and all sorts of other means, but what’s happening now is people are beginning to transcend politics and actually look to see “what are the solutions to the problems that are in common to countries all over the world?”

In Brazil, it’s being reported that incumbents and traditional political parties are having to reconsider their strategies and that’s great for what we call at Thrive the Stage 1 Phase of our Solutions Strategy, when we’re trying to bring as much integrity as possible to our existing systems and shrink the government down to just the protection of individual rights and the common. But, what we need to be careful of, I just want to remind people worldwide, is we need to watch out for just installing a new regime, just like happened in Egypt where now, after the big uprising and all the hope, it’s being basically turned into a military dictatorship by Mohamed Morsi over there. And the same thing with the uprisings in Russia and now, Vladimir Putin, former head of the KGB, is now running the country again and limiting liberties all over again.

So, what we’re seeing in these powerful demonstrations all over the world is that the hope is real and that the commitment is real and I believe our challenge is actually to come up with solutions that finally transcend these old political polarities and begin to surface the principles like non-violation, like integrity, like true freedom on which we can base a lasting justice.

So, that’s number one. Let’s go on to other good news.

On a smaller scale, but equally exciting to me, is in Hackensack, New Jersey, just outside of New York, the City Council tried to take away a private citizen’s property, a guy named Michael Monaghan, but with what they call “eminent domain” and that may smack for you as it does for me of the old, so-called, “divine right to rule” or the “manifest destiny” that was claimed by the original American government. Really what it is is just the government making up an excuse to take your property and then, usually, give it to developers who have paid them off. But, in this particular case in Hackensack an Appellate Division of the State Superior Court defended this guy against the City Council and let him keep his property and then, a grass roots group called Citizens For Change won every single seat in the next election throughout the entire City Council even though they were out-funded 2-1. They successfully ran on a platform against costly litigation, against nepotism, against corruption (for instance, the police chief of Hackensack was recently convicted for official misconduct and insurance fraud). This is a little example, but one that’s being replicated fractally all over the planet as people are actually beginning to stand up for their rights and question ”by what authority are you stealing my property?”

Another item that is very exciting to me is that David Icke is responding to popular demand in England and creating his own online TV station and he’s calling it “The People’s Voice” and he’s already got reporters like Sonya Poulton, who was a very popular mainstream reporter who, basically, got suppressed by the mainstream for telling the truth. Luke Rudkowski, from New York. Mike Adams, also from the U.S., the Health Ranger. Max Egan, who I had the opportunity to meet with when I was in Australia who’s a fabulous activist and very informed and a guy named Robert Perala, from the San Francisco Bay area, who was the M.C. at Conspiracy Con where I went a couple of weeks ago, is very aware of a lot of the major agendas and solutions around the world. And so, he (David Icke) posted this online and did an Indiegogo campaign. (He actually started with KickStarter and they wouldn’t take his initiative.) So, he went to Indiegogo, raised the £100,000 in kickoff funds they needed in just 6 days and now they’re almost complete in raising the next £200,000 they feel they need to do a really high-quality job. Once again, it’s starting all over the world. The truth is starting to get out, one way or another.

And then, finally, the last one I want to mention is that Iceland, who I’ve talked about in blogs before, who stood up to their bankers and actually threw out the Rothschild bankers, prosecuted them, got them out of business, and then refused to go along with the IMF and World Bank programs. I was really encouraged by that and then disappointed to hear that they were considering joining the European Union because as far as I’m concerned that’s just putting themselves right back in that same central banking straight jacket because that’s what the purpose of the European Union really was in the first place as far as I can determine. Anyway, it turns out Iceland is on the road to a much stronger recovery than any other European country that’s faced a crisis in recent years and this was a statement from Olafur Grimsson, who is their President. So what’s happened is they have decided to re-think even the decision to join the European Union. They did a poll amongst their citizens and 80% of them said they didn’t want to so they’re actually using the best of democracy and they’ve now dropped out of the talks of doing that and they have now inspired even the U.K. to consider leaving the E.U.

With names in the news like Kristen Meghan and Edward Snowden and Michael Hastings and Tom Drake and Bradley Manning and all these courageous whistleblowers coming forward and really telling the truth about what’s going on, people around the world are beginning to tell their own truth. There are many, many more whistleblowers who are in the process now of coming forward and people are turning their backs on the central bankers, they’re turning their backs on these fake austerity programs, which is basically just justifying the bankers running off with your money and you having to adjust without taking a stand against them, meanwhile giving up not only your money, but your rights to privacy, etc.