"In March, 1915, the J.P. Morgan interests, the steel, shipbuilding, and powder interest, and their subsidiary organizations, got together 12 men high up in the newspaper world and employed them to select the most influential newspapers in the United States and sufficient number of them to control, generally, the policy of the daily press.... They found it was only necessary to purchase the control of 25 of the greatest papers. An agreement was reached; the policy of the papers was bought, to be paid for by the month; an editor was furnished for each paper to properly supervise and edit information regarding the questions of preparedness, militarism, financial policies, and other things of national and international nature considered vital to the interests of the purchasers." 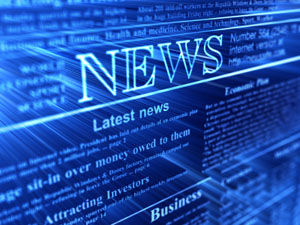 Most media is owned by large corporations that benefit financially from the promotion of a particular message. This inhibits true journalistic inquiry. Stations are largely funded through advertisements, making them less likely to provide content that conflicts with the agenda of the advertisers. This is a big problem for everyone. It means content is censored based on a profit-motive.  We don’t always hear the truth, or get the whole picture, because certain stories threaten the moneymaking abilities of corporate owners.

When I followed the money behind the media, I found that it is largely controlled by the same economic elite who dominate all other sectors. The control seems to come from owning stock in the major media companies, and issuing loans to media companies that elite bankers agree with and repealing loans from those that threaten their control. For example, there’s a nationwide movement to abolish the Federal Reserve, but there has been little to no press coverage. By controlling the media, the banking elite can control what information gets out to the public. It’s no wonder most people don’t know how the economy actually works…we’re not supposed to know.

Many of the largest banks own stock in major media companies. Chase Manhattan Bank has accumulated stock of various news outlets over time. In July 1968 the House Banking Subcommittee reported that through Chase Manhattan Bank, Rockefeller owned 5.9% of the stock in CBS. [1] In 1974, a report issued by Congress stated that Chase Manhattan Bank’s stake in CBS went up to 14.1% and NBC to 4.5%. It also held stock in 28 broadcasting firms. I have not been able to find more recent information on media stock ownership, but I imagine Chase and other bankers would not sell their stock given that the industry is growing and remaining profitable.

There is also significant overlap of Board Members in big banks and the biggest media corporations. Directors oversee company activity and have significant authority over management.  These Directors often make decisions that support each other’s consolidation of power.

Jessica P. Einhorn
Trustee of the Rockefeller Brothers Fund.
Former Managing Director of Finance and Resource Mobilization at the World Bank.  Visiting Fellow (1998-1999) at the IMF.


Here is a map of other corporate ties to Walt Disney: 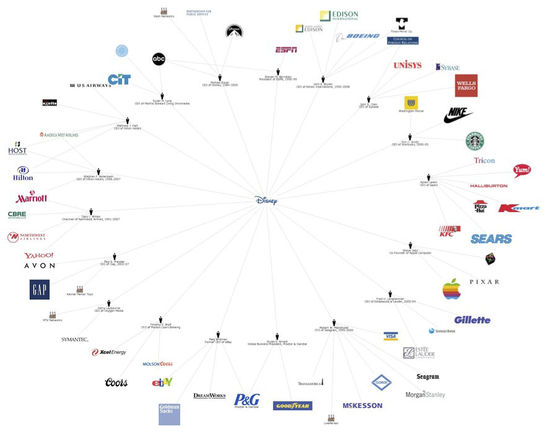 
Here is a map of other corporate ties to News Corp.: 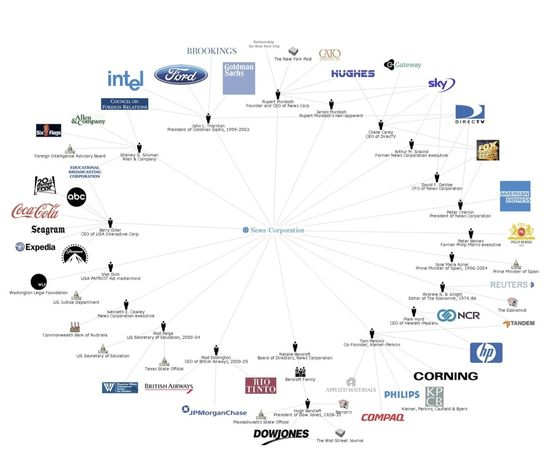 
Political contributions are another way to buy power. In 2008, The TV/Movie/Music Industry gave more than $34 million in total contributions to Congress (75% to Democrats and 25% to Republicans)[2]  and Telephone Utility Companies gave more than $7 million (46% to Democrats and 54% to Republicans).[3]  AT&T is one of the biggest funders of politicians – it has given more than $39 million since 1989.[4]  There are also more than 110 people who have gone back and forth between some of the largest media corporations in the nation and the Federal Communications Commission (FCC).[5]

I believe that the five major media corporations in the U.S. – Time Warner, The Walt Disney Company, News Corporation, Viacom, and Bertelsmann – are owned and operated by a small group of financial elite whose interest lies in selling certain products and messages that will support their agenda for not only maximizing profit, but also centralizing control of the population. They are not adequately informing the population. Instead they are breeding a culture of inadequately informed people by failing to cover stories that are important in order to protect their own interests.

For more information on media ownership, check out “The Big Six” ownership chart on the Free Press Website.