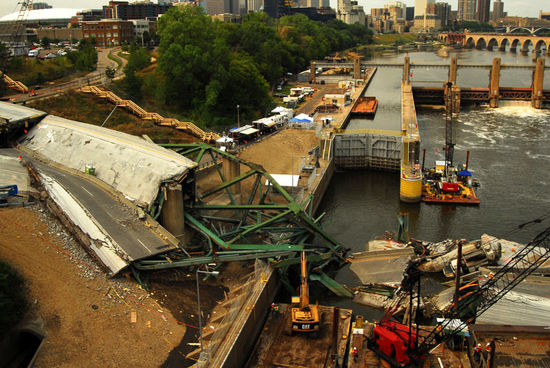 Infrastructure is often taken for granted, but it’s what keeps your daily life running smoothly. The roads you drive on, the water you drink and how you get it, the electricity you use and how it’s generated, whether your waste is recycled or exported or left to rot are all determined by infrastructure. If infrastructure is broken, you notice. If it’s sound, you don’t.

Entire countries are struggling as a result of poor infrastructure. America’s infrastructure may look good, but it’s actually in a state of disrepair. The American Society of Civil Engineers gave U.S. infrastructure a near failing grade.[1] 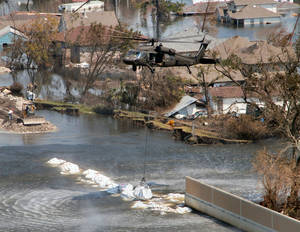 America’s approach has been reactive instead of proactive when it comes to infrastructure. When the levees broke in New Orleans in 2005, it wasn’t because the government didn’t have the ability to structurally secure it, it was because they ignored the evidence and warning signs.  In fact, President George Bush, Jr. cancelled the majority of the funding that had been designated for the imminent repair of the levees. The result was disastrous: a beautiful city went underwater, thousands of lives were lost, families were shattered, and homes and businesses were destroyed.

Similarly, the 2010 Haiti earthquake which killed hundreds of thousands of people and made millions homeless, was not necessarily a natural disaster, but instead an “engineering disaster.”  As head of AIDG (the Appropriate Infrastructure Development Group) explains in this video, a much larger earthquake hit Chile almost a month later and the death toll was under 1,000.

What made the difference? Infrastructure. The buildings in Haiti were poorly constructed, whereas the ones in Chile were structurally sound.

We can avoid these tragedies and get people the electricity, drinking water, and safe housing they need. Check out the opportunities below.

According to the American Society of Civil Engineers (ASCE) it will take a 5-year investment of $2.2 trillion to get American infrastructure functioning properly. By addressing the problems now we can create more jobs, modernize communities, and build more sustainable systems.

The movement for green, natural infrastructure is becoming more popular as these videos show. Los Angeles, one of the most polluted cities, is taking important steps to clean up the city by redesigning its infrastructure with a whole-systems approach. It has already saved a lot of money and water by doing so.

Green For All shows how building a green economy can create millions of jobs and lift people out of poverty while saving the environment.

Green Your Home, School or Neighborhood...

Calculate the environmental impact of your household, and find out ways to lower it with the Low Impact Living Calculator.

Get Better Cafeteria Food – Use this Toolkit with step-by step instructions to get healthy, local, sustainable food in your school cafeteria. You can also Link up Local Farms with Your School, Start an Edible Schoolyard, and/or a Life Lab Garden Classroom.

Get Your Energy From Renewable Sources – The “Alliance to Save Energy” has a Green School Program that works with students to come up with a plan to save energy in their schools.

Reduce Waste – Set up a Recycling Program and Compost. 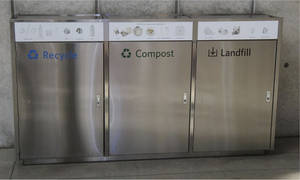 Re-label Trash Cans as “Landfill” – By labeling trash cans as “landfill” you can cut down on waste and get students to think about where their trash is actually going. This is an easy and effective way to reduce waste.

Build Green - The U.S. Green Building Council offers a wealth of information to transform schools into healthy environments that are “conducive to learning while saving energy, resources and money.”  Check it out and make your school a Green School. 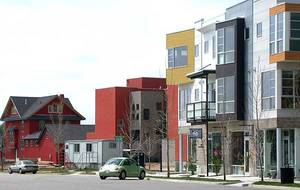 Photo by Matthew Trump
Transforming your neighborhood can take a lot of work, but it’s key to reducing our oil dependency. The “New Urbanism” movement focuses on greening neighborhoods by making more walkable spaces. The key is designing urban areas so you can walk to the grocery store, shops, work, parks, etc.  Pick something you think is doable in your neighborhood (petition for a park in the area, talk with the county planning department about future growth, create a community garden, etc.) and work with your neighbors to make the shift.

Some examples to learn from include:

Kentlands, Maryland – An award-winning neo-traditional community in Gaithersburg, Maryland. People can walk to school, work, and to do their shopping. There are single family homes, town homes, condominiums and rental apartments along with work/home units.

Seaside, Florida – A vibrant and evolving community of both year-round residents and seasonal guests united in the belief that life is enhanced when people interact, learn and share through experience.

Why would we risk all life on Earth by exposing ourselves to the most dangerous pollutant ever discovered when there are safe, sustainable and cheap alternatives?
Read More
Link Embed
Close