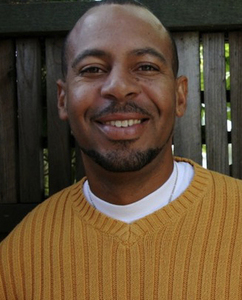 We filmed hundreds of hours of footage for THRIVE, and some of our favorite clips never made it to the final cut. Here are some especially touching clips from one of our beloved pioneers, Aqeela Sherrills.

Aqueela Sherrills is a peace advocate, mediator, and spirit-centered activist based out of the community of Watts in Los Angeles, California. As a witness to the brutality of gang violence, at age 19, Sherrills co-founded the Amer-I-Can Program to heal gang violence around the country. In 1992, Sherrills and his brother, Daude, successfully brought rival gangs, the Bloods and Crips, together to sign a historic peace treaty in Watts, L.A. He and his brother also created the Community Self-Determination Institute in 1999 to tackle the overwhelming personal and social issues that underlie crime, drugs, and violence.

Currently, Sherrills is the Principal of The Reverence Project, a 3-prong initiative that is working to shift the social and philosophical construct of present world culture rooted in violence, shame, guilt and fear into a more balanced worldview rooted in reverence, forgiveness, compassion, and truth. He also is a Strategist with Californians for Safety and Justice, an organization providing smart solutions to California’s broken criminal justice system. Sherrills is also on the board of MVFR (Murder Victims’ Families for Reconciliation).

From the ground-up, Aqeela has sought ways to cultivate peace in gang-torn urban communities. Even after the murder of his own son to gang violence, Aqeela remains steadfast in his commitment to non-violence.

Using urban communities as a microcosmic window into the entire world, much can be learned by understanding how violence is perpetuated in these communities through unhealed childhood wounds, loss of family units through poverty, and unpacking who benefits and therefore has a stake in the violence continuing.

“Reverence is the quality of attention that we give to someone or something. It’s our ability to see people beyond the experiences they have had and hold space for their highest possibilities to emerge. I believe that ‘where the wounds are is where the gift lies.’ By exposing the wounds of our personal tragedies, guilt and shame, we subconsciously give permission to others to do the same, in some cases releasing generations of pent up anger and aggression. Reverence is the convergence place of all of the movements of the past (i.e. civil rights, human rights, environmental justice, etc.) because at their root is a need to restore the vitality of the human spirit. If we cannot imagine ourselves in the future with our so-called enemies playing a role in our salvation, we are all doomed to repeat the past.”
— Aqeela Sherrills

Aqeela: One of the things that we would do as a part of our training in the neighborhood, or our education for the most part, was to engage people in these conversations about their mother or their father. So, you have 20 guys together and you say, “Tell us about your experience with your father. We don’t want the philosophy of what a father is. We want your actual experience. If you didn’t have a father in your life, then the person who played that role. And, if you like, you could add in you as a father, in relation to your own father.” The stories that would come out…white, black, brown…it’s a common denominator. It puts us all on the same level because many of us live our lives through the wounds of our childhood. 85% of the people in the world never get beyond the wounds in their personal life that happened to them as a kid. The images in the way in which they see themselves, they never come to terms with it and they live their life through that channel.

Urban America to be Trim Tab for Change

Aqeela: Where in the culture is there a trim tab placed that we can actually use to be that shift that ignites the quantum leap in the culture. I think it starts in urban America. I think that places like Watts are microcosms of what’s taking place worldwide. Especially with violence and public safety being the number one issue in this country (and I think worldwide because of all the war), we can really take a place like Watts and show the practical applications of peace. Peace is a process. It’s a series of peaks and valleys. It’s not a place you get to and then everything is wonderful. It’s not only a utopian idea in which everybody’s holding hands and kissing and being in love. It encompasses conflict as well because, as we said earlier, conflict is healthy. It’s unresolved conflict that actually leads to violence.

Aqeela: I’ve experienced a lot of suppression, a lot of animosity, jealousy, envy. All of those things to me are part of the process. I truly believe that it’s one of the litmus tests that says that you’re actually being effective in the neighborhood. If they aren’t talking about you, if they aren’t saying crazy stuff behind your back, then that means that you aren’t really doing anything out there for the most part.

System’s Investment in Perpetuating the Problem

Aqeela: Law enforcement used to keep the conflict going with us in the neighborhood by picking us up and dropping us off in so-called enemy territories, telling folks, “These are Bloods over here” because they were making so much money off of overtime. A war on poverty. A war on drugs. A war on gangs. None of those things will ever work because it’s a war and poverty is a social construct. It’s a way of thinking.