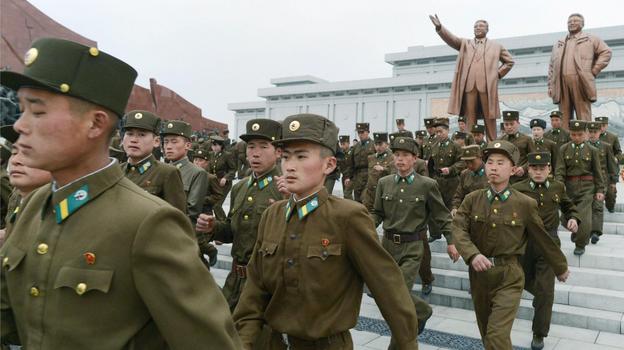 In this audio excerpt from a call with THRIVE Movement staff members, Foster Gamble gives his views on the current situation in North Korea:

Foster:
I’m very confused about North Korea like virtually everyone else I can find. I’ve been reading David Icke and listening to Alex Jones and a bunch of other people and everybody’s confused. There are a few things that we can know, which is that this kind of sabre rattling on both sides has happened numerous times with North Korea. And usually what happens is the North Koreans come together at the table with some representatives from the United States and they sit down and North Korea says, “OK, we’ll back off a little on the nuclear thing, but we need money and you need to lighten these sanctions.” That’s always happened in the past. My guess is that’s what they’re trying to do again.

The scary part is that North Korea’s really kind of posing as potential civil war again with South Korea. So, you have these little entities on an island, artificially divided by us, but you’ve got China behind North Korea because they have sworn allegiance to North Korea. They haven’t had to back that up militarily since the Korean War, but they are there and they are amassing forces on the borders of North Korea. People don’t know whether that’s to potentially go against South Korea or against the United States or whether it’s to keep North Korean refugees from fleeing by the thousands or the hundreds of thousands (or millions) across the border into China, if war starts. And, we have moved two destroyers into the area that have anti-missile capabilities, so there’s a lot of show going on.

I’m, frankly, not concerned about the official sources actually starting a war with the U.S. or vice versa, but what I am more concerned about is there are crazies. There are people like Dick Cheney or Henry Kissinger who would do some sort of false flag things behind the scenes to get World War III going for the sake of their own sick psyches and, also, for the sake of not only getting a tremendous amount of money into the military industrial complex and benefitting from it, but of moving closer to Armageddon and moving closer to a situation where they can…they’re in their last days themselves and they’re sick enough to want to take a lot of people with them when they go.

But also remember, when 9/11 happened, there were seven major countries that were not going along with the Rothschild banking system. Now there’s only two. Each one of the other five have basically been taken over and now have these international central banking systems. The two that are left are Iran and North Korea. So, it’s no coincidence that the major sabre rattling for war is going on with those two countries. And, on the one hand, there are those factions that would like to see an invasion and get things going and then impose martial law in the U.S. and shut down the Internet, that whole cascade of stuff that I’ve {written about or} spoken about in the Iran blog, but it can also be just the same kind of strategy that was used against Russia to be in an arms race that breaks them financially so that ultimately they collapse from the inside. And that’s a lot of what I think the strategy is with North Korea.

It’s really bizarre with North Korea because the United States does not recognize them as a nuclear state even though they have clearly demonstrated they have nuclear weapons and I think it’s because nuclear states actually have a certain status in the world diplomatically, and they’re on the Security Council and things like that, where they don’t want North Korea. It’s just like a MAD Magazine cartoon or something that they won’t recognize them as a nuclear state even though they are a state that has nuclear weapons. So, there’s still this same kind of sham being played out that somehow other countries aren’t allowed to have the same weapons that we have. They say (I saw it on TV this morning), in order to fulfill their responsibilities to the international community they need to either not build or get rid of nuclear weapons. Says who?! The only country in the world that has ever used nuclear weapons is us, and we used them twice. Obviously, the second one wasn’t necessary except to try to scare the rest of the world.

So, it’s a bizarre sort of risky brinksmanship that is going on and I think the fundamental reason is to break down these two countries so that there is the hegemony of the global banking system.