Imagine this: planes fly overhead in the middle of the night and spray poison on homes, cars, playgrounds, parks, streams, and directly onto people. These actions are intended to continue for 9 months a year, for up to 10 years. Sound unlikely? Well it’s not. It was California’s reality from 2007-2008...that is, until residents rallied and eventually brought the spraying to a halt.

Source: www.veganreader.com
Lefferts, Marshall
In 2007, a “state of emergency” was declared in California because the Light Brown Apple Moth (LBAM) was supposedly doing significant damage to agricultural crops. The state’s solution to the problem was to bypass everyone’s rights, and spray the whole state with a pesticide that would eventually eradicate the moth. Soon enough, planes were flying over residential areas in Monterey and Santa Cruz Counties, blanketing communities with this dangerous spray. 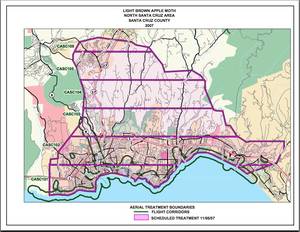 Source: www.indybay.org
Lefferts, Marshall
Ultimately, the aerial spraying program was abandoned and in May of 2009, the EPA banned the two controversial sprays associated with LBAM – a major victory for California residents and activists.

The THRIVE Sector model, as embodied in the Sector Navigator below and the 12 Sectors Landing page, proved helpful in optimizing volunteer efforts in the Santa Cruz and Monterey areas by encouraging focused and coordinated efforts in Health, Environment, Economics, Justice, Governance, Science, Arts and Media.